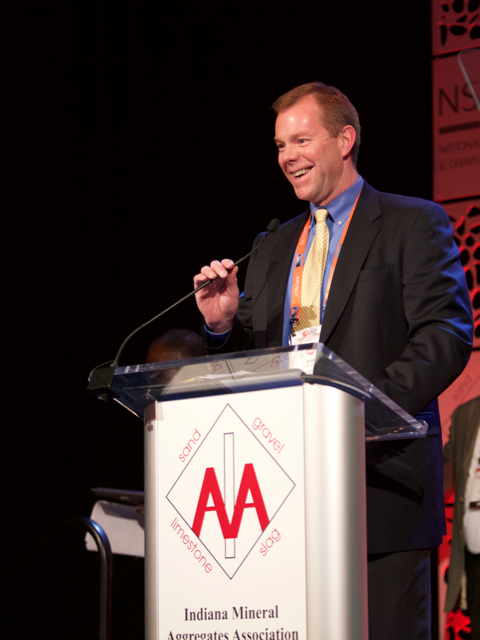 IMAA started awarding the Keystone Award in 1998.  By definition the keystone is the topmost stone of an arch, popularly thought of as “especially holding the others in place.” This year, IMAA recognizes another person for his impact on the Indiana aggregate industry. IMAA congratulates Andy Williams for receiving the 2019 Keystone Award.

“The Keystone Award is one in which the meaning of the award describes an industry leader. Andy Williams exemplifies one in which individuals want to follow,” said IMAA Executive Director Calvin Lee. “This award recognizes an individual in the aggregates industry who has shown exceptional leadership and outstanding dedication to advance the goals, growth, and well being of the Indiana aggregates industry. Andy has done exactly that throughout his career. When we looked around the industry for a recipient of this award, we did not have to look far. Andy simply bubbled to the top.”

Andy has been involved with the Association for most of 20-year career at Rogers Group.  He served as a Director from 2008 to 2010, on the Executive Committee starting in 2011., and became the IMAA Board President in 2014.  Andy has participated in several Washington D.C. Fly-ins, taking the industry message to lawmakers. He was instrumental in creating the Indiana Mining and Mineral Education Program (IMMEP), serving on the IMMEP Board since its creation in 2015.  He was also a strong ally and promoter of IMAA’s Women Leaders in Mining & Aggregates (WLMA) committee. Andy clearly has a passion for educating young people about the industry and creating a stronger industry workforce through inclusion.

“I am humbled and grateful. I’ve truly enjoyed my career in the aggregates industry and my roles within IMAA and IMMEP,” Andy said during his video acceptance speech during the annual Awards luncheon. “I’ve been involved with many industry and community organizations over the years, and none have brought me as much joy and satisfaction as the IMAA.”

Shortly after the conclusion of the 2020 Winter Workshops, Andy Williams announced his retirement from Rogers Group, Inc. Andy plans on spending more time with his family and sharing his knowledge by teaching at Indiana University.